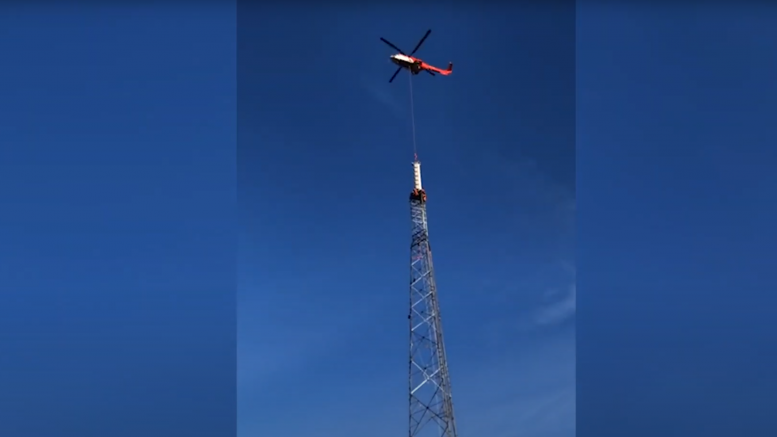 THE final piece of the new Bilsdale temporary mast fell into place today after better weather over the North York moors.

A helicopter lifted the final sections of the temporary mast into place today (December 9).

Read more: Farmer talks of losing hundreds after being forced to use generator after Storm Arwen​

The 80-metre tower is set to provide improved TV signal quality across the area, and it follows the switch on of another mast of the same height in October.

Following the installation of the broadcasting equipment and extensive testing, the new temporary tower is planned to come into use in the new year.

Testing of the new structure will result in some short, temporary disruption in certain areas

The original Bilsdale mast, which was more than 300-metres high, went up in flames on August 10 and was later dismantled.

It comes after many suffered disruption to their TV service on Tuesday due to extreme weather from Storm Barra.

Arqiva later provided a statement later that day to confirm that “bad weather conditions” by Storm Barra resulted in ice forming on the temporary mast on the Bilsdale site.

“As a result, a safety measure to protect antennae on the temporary mast was tripped, which then caused a temporary loss of service.

“The outage lasted for 53 minutes before an engineer at the site was able to fix the issue and restore services.

“With high winds and sleet on the moor top our team of engineers remain vigilant near the site and is monitoring the situation closely.

“We ask that viewers do not retune their TVs and apologise for any disruption caused.”

You can also follow our dedicated North Yorkshire Facebook page for all the latest in the area by clicking here.

For all the top news updates from right across the region straight to your inbox, sign up to our newsletter here.